This is a house we bought for cash in the Van Story Hills subdivision in Garner NC, just behind the Lowes Foods and Planet Fitness off Timber Drive.  It was a brick ranch built in the 1970’s that was a solid house but needed a substantial amount of work.

This home had only one owner and they had made it their home for the better part of 40 years.  The wife has passed a few years back and the siblings had moved out and started their own families many years ago.  The owner was now in his 80’s and could not afford the upkeep of a 1700 square foot home on a 1/2 acre lot in Garner.  There was an issue with water intrusion in the crawl space, and some leaking plumbing.  Almost all of the fixtures in the home were original and needed to be updated.

The one thing that provided us with an opportunity to create value was the outdated floor-plan.  For most of the 20th-century home-builders would separate each and every room making the floor plan “closed off” and made it feel smaller than it actually was.  We were able to remove the wall that separated the living room from the kitchen and dining room which opened up the entire home, and allowed tons of natural light to brighten up the living area.

Kitchen: Before and After 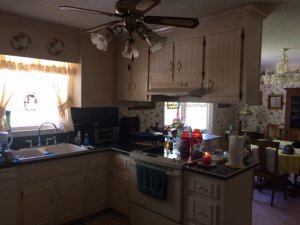 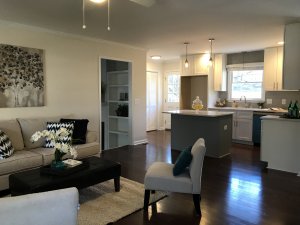 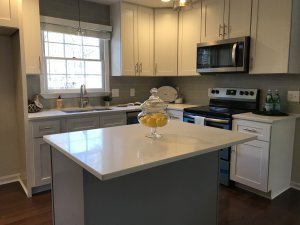 As you can see in the above photos the wall that divided the kitchen and living room was removed to open up the space.  This allowed a lot more natural light to enter the home.

Another opportunity to create additional value was in the bathrooms because the tile, vanity, shower, wallpaper, and fixtures were all original and outdated.

Hall Bath: Before and After 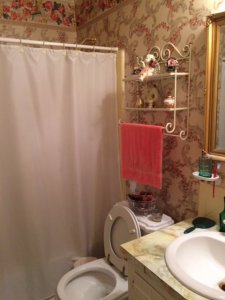 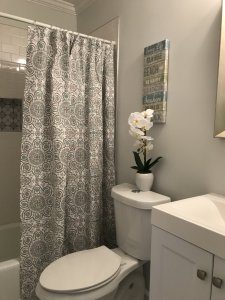 As seen above the hall bathroom was completely renovated.  All new tile, shower fixtures, wallpaper removal and paint, new vanity, new toilet, and new tile flooring.  The “popcorn-paint” that covered all the ceilings was also scraped off and the ceilings were repainted.

After the renovation was complete we invited the owner back for a private showing and they were amazed at the transformation of their home.  They loved the fact that it was restored to brand new condition it had when they first bought it in 1974.

They were nice enough to leave a review on Google Reviews describing their experience:

Mike Otranto and his partners purchased my father’s house–just closed on it yesterday. The whole process of selling a house that needs work for your 88-year-old father who can’t move out until his name comes to the top of the waiting list at one of his chosen senior properties could have been a very stressful situation. But Mike made it better than we could have made it on our own. Just knowing we could trust him was huge, and he proved himself over and over. He is calm, straightforward, knowledgeable, honest and fair. And when we had questions or concerns, he moved quickly to address them. Dad and all of our family couldn’t be happier that Mike and his partners were the ones who purchased the house and will now be flipping and selling it. It was the home where we experienced many wonderful memories over the years. We can’t wait to see the final result of their hard work and are praying that many blessings will be experienced in this home by all future owners and their families. I highly recommend Mike Otranto (so thank you again, Mike)!

Sell and Be Done

“It was easy and quick.”

“It was the easiest sale I ever made. I called them up and they came and made an offer the same day.”

“We had a home we inherited from a relative that we need to sell very quickly. We were glad to business with Mike it was really easy and hassle-free!”

“Easy transaction, no closing costs, very satisfied with customer service and I would recommend!”